The Phantasm was a member of the "HU Crew". He was a mixer and left before Hollywood Undead was formed.

Justin Roman is a freestyle rapper and a live DJ. He started getting into music when he got his first cassette deck at the age of 5 from his parents as a gift.

In 2002, he released his first album called Teleportation and would sell it on the street for a few bucks. After people around the neighborhood heard about him doing music, he started working with local rappers and singers.

After he got better at producing, he continued working with artists, recording his own stuff, doing shows, promoting himself on MySpace and also getting number one artist in LA for song plays and views at times.

His mask, similar to Charlie Scene and Shady Jeff, was a bandana.

He wore a generic bandana that was red on one side, and blue on the other. He wore 3D glasses that had the opposite colors on one side as his bandana.

Later, he wore regular sunglasses over the bandana.

He had a light purple bandana as well. 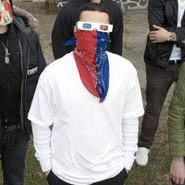 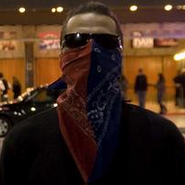 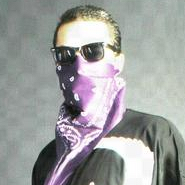