J-Dog is one of the five current members of Hollywood Undead.

Jorel Decker was born in Los Angeles, California on May 1, 1984. His mother was, as J-Dog describes "a hippie" and his father was a truck driver, and insisted on Jorel becoming a truck driver later on in life as well. He first met future bandmate Johnny 3 Tears when he was very young, but they did not like each other when they first met.

He grew up with Deuce and hung out regularly with Charlie Scene's older brother, Jake Terrell.

His first musical interest was when his mom took him to see the British band "The Who" live when he was 13, and it motivated him to start making music, and the bass player of the band specifically made him have a particular interest in playing bass.

He also never went to high school or college and was never really "schooled" by his parents due to his mother's disapproval of the public school system.

During his teenage years, Jorel wanted to be in a gang and started hanging out with several members of gangs. Eventually, his parents sent him away to a reform school in New Mexico to spend time away from the gang violence and nature of Los Angeles. His father also eventually started working there since his family couldn't afford it. When asked about living there, Jorel stated: "I hated it at the time, but in retrospect, after I left there I realized that really saved my life."

He was at the reform school for a year, before graduating the program only to be sent back two years later.

After he got out of the reform school, he started playing in several bands, some of which his future Hollywood Undead bandmates were present in as well.

One of his later bands was The Kids, which initially started out as a project with his lifelong friend Aron "Deuce" Erlichman and friend Jeff Phillips. The band went on to become Hollywood Undead, with Jorel being the only remaining founding member.

It is said that Jorel had a brother named Evan Decker who committed suicide, but this was disproved by Evan Thomas (evanthomas750 on Instagram) through DMs after answering questions by a fan.

On May 2, 2015, he became engaged to his longtime girlfriend Vanessa James onstage at the Carolina Rebellion.

J-Dog plays the most instruments out of the band, he plays guitar, bass, keyboard, and synthesizers. He can also play the drums but does not do it for the band.

Upon creating his mask, J-Dog found a dollar bill next to him. He put it on his mask to make it unique.

J-Dog often provides the most aggressive lyrics for the band. When he raps, his lyrics are about dying, love problems, stronger thoughts, and violence. On occasions, most commonly in older songs, he'll sing about partying and girls, however, this hasn't been done recently, with J-Dog being absent from major parts on all party-themed songs in Notes from the Underground and Day Of The Dead other than Up in Smoke and Guzzle, Guzzle.

J-Dog's favorite songs from the band are Hear Me Now, Been to Hell, S.C.A.V.A. and Outside. His favorite from Day of the Dead is Usual Suspects, mostly because of its music video. War Child is his favorite song to perform.

His favorite song from V is Nobody's Watching.

J-Dog's mask back in 2006 was a basic white goalie mask with blood flowing out of its eyes onto a 1 dollar bill which covered its mouth. There were also small butterflies around the mask.

J-Dog had a white mask retaining its previous features. His eyes and the dollar bill now had different patches of blood rather than the blood from the eyes flowing onto the dollar bill. His mask bore a Louis Vuitton inspired design with his initials mixed in with the different shapes.

The mask was basic white without the Louis Vuitton design probably due to licensing issues. The blood wasn't transparent anymore and didn't flow onto the dollar bill. He also had "J-Dog" written on the right side of his mask and "Undead" written on the left.

J-Dog's mask is still white and once again has patterns all over it, although this time with a lighter grey color. The mask has less blood, burns seemingly replacing it. Instead of flowing blood, the mask has scars. The burns around the eyes light up with a red color. The dollar bill is now customized with a special face on it.

J-Dog's mask is white just like the other ones. It still features the patterns as his previous mask did, but they are now green and more visible. The mask still has the orange glowing ashy cigarette burn marks on the eyes. The big difference is that his mask now looks like a gas mask with two canisters on it. There is no real dollar bill on the mask, just a dollar sign. His mask now has the All-Seeing Eye on his forehead. Under the All-Seeing Eye, you can read "Hollywood Undead" instead of "Novus Ordo Seclorum". The mask lights on the ashy burning cigarette eyes and the canisters.

J-Dog's mask is now beige instead of white. The gas mask canisters are now gone, replaced by two of the "Dove and Grenade", the band's mascot. The dollar sign stayed, but it is now black and more tawdrier. The burning design around the eyes looks as if they have burnt out and turned to ash giving it the appearance of cigarette ash. Transparent blood also trickles down from his eyes similar to how his mask looked from Swan Songs. "Undead" is now written at the very top of the mask above the All-Seeing Eye. Like most of his masks, this one features some kind of pattern as well. On the forehead and the nose, there are veins, which seem to be the roots of the All-Seeing Eye. It no longer lights up like it did in the previous two renditions.

Like most members of the band, J-Dog has also replaced his mask with a chrome one. The mask itself is one color, while his signature dollar sign and the blood pattern use the secondary color of a given collection. There is also a triangle shaped dent on his forehead, reminiscent of the pyramid from his previous masks. 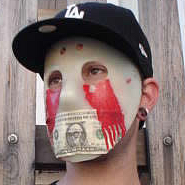 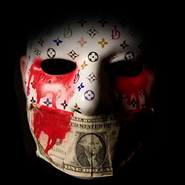 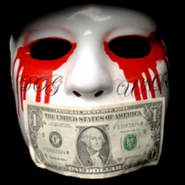 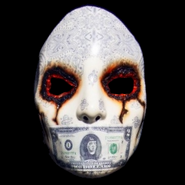 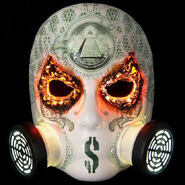 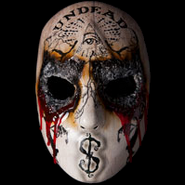 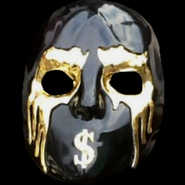 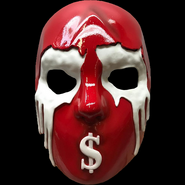 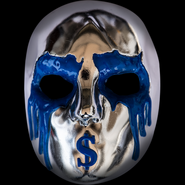