Deuce was a member of Hollywood Undead until early 2010. He left because of a disagreement with the band. It has yet to be confirmed as to the exact reason why he got kicked out/left, as the band and Deuce himself state different reasons but none have been confirmed. He has gone in a solo career since his departure from HU and has since worked with his crew, Nine Lives.

Aron Erlichman was born on March 2, 1983, in Los Angeles, California. He knew future bandmate J-Dog from a very young age, and they grew up together.

He used to date three girls named Angie, Sarah and Athina. He also dated a girl, “Sigh”, which the song Circles is about. He is currently single.

Deuce co-founded Hollywood Undead along with J-Dog and Shady Jeff. He was the lead singer and producer of the band's first album Swan Songs and their DVD/Box Set, Desperate Measures. In late 2009, Deuce left Hollywood Undead after having several problems with the band. He later wrote a song titled Story of a Snitch with the lyrics consisting mainly of obscenities and insults directed towards Hollywood Undead also making claims such as he was kicked out of the band and that members of the band were "tryin' to spit just like me but they don't have it". Charlie Scene told an interview for "World Famous Rock" that Deuce did not show up on tour after the band refused to continue paying over $800 a week to bring along his unnamed "personal assistant", whom they had paid for nearly 4 months. The band also explained that it was a struggle having Deuce in the group.

In an interview with Bryan Stars, Da Kurlzz stated, "It was so bad, that I don't think there would've been another record if he was still with us. We bent over backwards to accommodate Deuce". Deuce later responded to this in his own interview with Bryan Stars that the personal assistant Charlie Scene spoke of was, in fact, Jimmy Yuma. Jimmy Yuma said that he was paid by Deuce out of his own pocket to set up equipment for him and that the band didn't have to pay anything until he began setting up their equipment on tour also. Deuce also mentioned in the same interview that he did not show up to the tour in question because he had received a phone call from the manager previously who claimed the band had "broken up" and was told not to go on tour.

During an interview with JackedUp Radio, Deuce states that one of the disputes he had with Hollywood Undead was over having a personal Twitter account, Deuce claims that when he began to connect with fans over Twitter he was told that "if you keep twittering, you're not going to be allowed to go on tour".

After he left, he was replaced by Danny in 2009. He has since moved on with his solo career starting with his EP The Call Me Big Deuce EP containing unreleased demos from the mid-2000's and a couple of songs featuring rappers from his crew 9lives.

In 2012, around two years after his falling out with the band, Deuce claimed that he was jumped by Hollywood Undead and was attacked by them after a performance at a nightclub Angels N' Kings on May 25th. He claimed that Funny Man and J-Dog were the main attackers. This is likely a false claim by Deuce, as Funny Man stated in an interview with Rover's Morning Glory "I've never jumped anyone in my life." and Da Kurlzz and J-Dog both agreed, stating that they also haven't jumped anyone. They can‘t talk about this for legal reasons.

Later, in May 2015, Deuce tweeted "you and your faggot ass friend George Ragan gonna go to jail for extortion. fuck u both." to Da Kurlzz's twitter. This could mean that Johnny 3 Tears and Da Kurlzz are guilty of extortion towards Deuce, or it is simply Deuce making false claims.

Deuce's mask was grey, with blue tear-like lines coming out of the eyes, and pink duct tape on the mouth. He said that it was just two of his favorite colors.

Deuce had a silver mask with the blue tear-like lines returning. He also retained the pink duct tape but the mask now had a more stylized lip.

The Call Me Big Deuce EP

Deuce had a blank white hockey mask that was a remake of his Myspace era mask.

Deuce's mask looks vastly different in comparison to his other ones. Unlike Hollywood Undead, Deuce has a different mask in every music video and even uses his mask from Swan Songs. He alternates between them from time to time. In total, he has five masks (four excluding his swan songs mask).

The main mask he primarily uses is the mask from his Let's Get It Crackin' music video, the blue tear-like lines, and pink duct tape have been removed completely, and the entire mask is in the style of a disco ball. It still has visible facial features, however, like the eyebrows and cheeks. It also has a slight smirk that is hard to see.

The mask he used in the America music video has the same general shape and some of the molding from the disco ball mask but with a torn up and slightly burnt American flag design. The top and the bottom looks like they have been burnt with blood and excess molding around them. The mask itself has blood splatters and two visible bullet holes on the forehead.

The mask from Help Me is unique as it is the only mask not to share the shape of his other ones. It seems to be a rubber George Bush mask with exaggerated and cartoony features.

His mask from I Came to Party also shares the same general shape as his other masks (although it's hard to see due to it being one of two masks to have never been shown without the mouth cut out.) It seems to be covered with red crime scene tape with "Danger" written all over it. There is also a black border around the mouth hole and around the eyes.

One of his masks from The One is a lighter grey duplicate of his Swan Songs mask with the mouth cut out. He wore this mask a few times live.

He had another mask that was a duplicate of his Swans Songs mask with the mouth cut out and was painted red with white music notes painted on it.

It's very similar to his first mask. It is a silver hockey mask with a blue spray tears and coming out of the eyes, and pink tape on the mouth.

Deuces mask in the official version of Invincible is a blank silver hockey mask with six holes around the mouth. 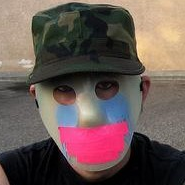 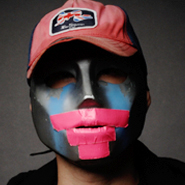 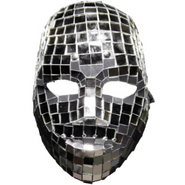 Let's Get It Crackin' 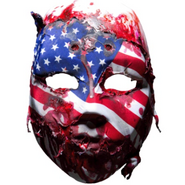 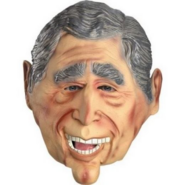 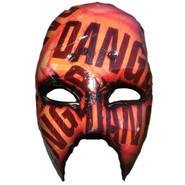 I Came to Party 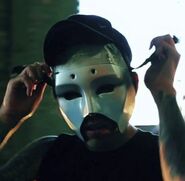 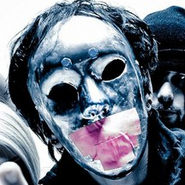 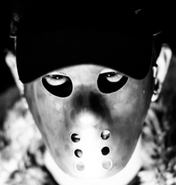 The Call Me Big Deuce EP

Blood on the Dance Floor

From Ashes to New