Da Kurlzz was a member of Hollywood Undead. Da Kurlzz very rarely recorded vocals for HU's songs. He did, however, record some of the backing vocals for the band.

Da Kurlzz left the band in June 2017 in order to pursue other interests. He parted ways with the band on good terms. He released a statement and shared a teaser of his solo work on October 16, 2017. On August 12, 2021 he released his debut single The Know It Alls under the name Magic Eyes.

Da Kurlzz was the drummer (percussion drums) for the band. He didn't record vocals for the band that much but did do a fair amount of unclean vocals. He was the fourth member to join the band.

Da Kurlzz left because he wanted to pursue other routes. In a statement by Johnny 3 Tears, he said:

"There’s not much to say. He wanted to do something else. We are always friends, but sometimes the lives of people change. That is what happened in this case. Sometimes I tell myself that I do not want to go on tour and the next day I tell myself that it is not true. It’s important to stay true to yourself and do not do what we do not want. There was no anger or whatever, and we have stayed on good terms."

Da Kurlzz's mask in 2006 was basic white with black lips. Before that, he wore a white mask that only covered his eyes.

Da Kurlzz's mask had a smiley face on its left side and an angry face on his other. He had a grey line splitting them apart.

Da Kurlzz's faces got switched around with a huge smile being on the left and the angry on the right. The angry side has red arteries that light up. The line that splits it is white, and it also lights up.

Da Kurlzz's mask has a big difference. The mask is still half-and-half. The left side of the mask is white, and the right side is dark red with brown scales. The red half of the mask is supposed to resemble half of his face blown off and the white half to be melted. The mask lights up, making the blown off half mainly bright red. Neither of the faces features the half smile like his previous masks did.

Da Kurlzz's mask is still half-and-half. The left side of the mask is still white but the right side is now gunmetal grey. The white half of his mask is angry while the grey half is the smiling one. It no longer lights up like it did in the previous two renditions. 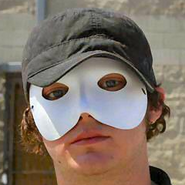 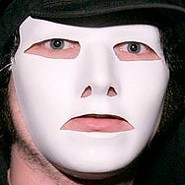 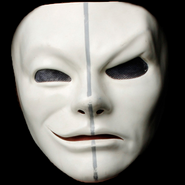 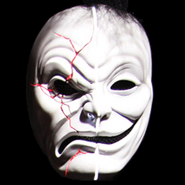 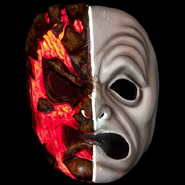 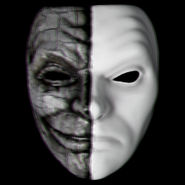